This is a particularly special site I’d like to discuss with you today: The Fairview Cemetery, near Oliver, BC. Fairview was a gold mining town in the South Okanagan-Similkameen, born out of the gold rush in the area in the late 1880s. Legend has it that gold was first discovered by a one-armed man in the 1860s, but no Europeans arrived to exploit the areas for gold until the 1880s. It was located just west of the modern-day town of Oliver, and some older homes in Oliver are said to have been built out of wood salvaged from the would-be ghost town. 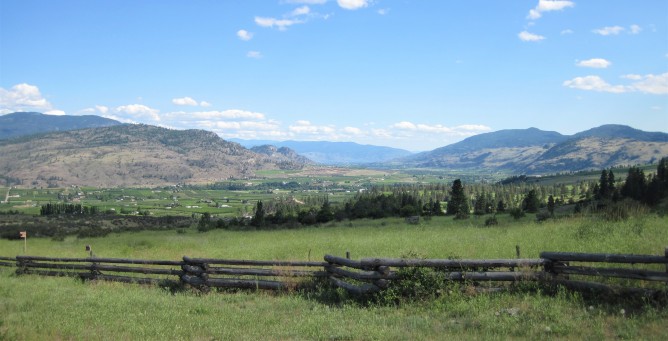 View from the Fairview townsite over the South Okanagan

I know, I know, at some point I’m going to have to do a burial site in Canada that isn’t from a province that I’ve lived in. What clearly needs to happen is a cross-Canada burial roadtrip, right? Alright, today’s post is predominantly about the town that filled the burial site, but that is what it is all about, really. We study burial sites as a form, perhaps the most direct form, of learning about a population, but the story wouldn’t be complete without also learning about other aspects of their lives as well.

Fairview was founded after gold was struck in the area, and mine claims began to be marked out throughout the southwest hills in the Okanagan Valley. The first mine was Stemwinder in 1887, followed by others such as the Morning Star mine. Across the valley to the east, Camp McKinney struck gold one year later and also  prospered. Fairview reached a population of nearly 5000 people. The town featured a general store, saloon, government buildings including a jail, and in 1897 the astounding Fairview Hotel was constructed. Standing three stories tall, the impressive building unfortunately burned to the ground in 1902 (as all good things in the Okanagan do. Stop building things out of wood there?), taking the lives of several settlers. When I worked at the Oliver & District Heritage Society in 2013, my colleague and I identified several burned silver spoons from the Fairview Hotel mixed into a huge box of silverware that had previously been uncatalogued. 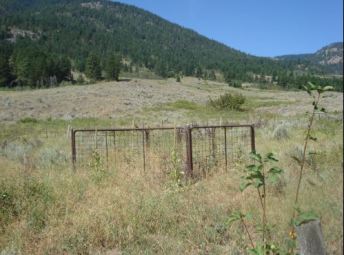 Today, the site of Fairview is all but empty, a plot of vacant land west of the Town, crossed by walking paths and dotted with a few trees planted by those early settlers. West of the remaining townsite, higher on the hill is the Fairview Cemetery site. Unfortunately, no grave markers remain at the cemetery today, save for a rusted iron fence surrounding the Tholl family’s plot where their children were buried (Heady 2012). While records of the site are incomplete, we do know that approximately 41 burials took place between 1890 and 1920, but the number is likely quite a bit higher than that. Fairview used to have a church (the steeple cross from which is at the Oliver & District Heritage Museum, in case you are interested in seeing it), as well as another hotel, and many streets.

In terms of the burial grounds that I normally study, putting graves to the west of town is a little unusual, but I haven’t done an in depth study of 19th-century gold mining town burial practices…yet. For Fairview, however, it makes sense. By the 19th century, people didn’t tend to like to have their dead in the heart of the settlement, hence having it away from the core living spaces. Since Fairview was situated on the east-facing slopes of the valley, approaching visitors would have come from the east into town, making it unlikely that the graves would be on the east side, immediately visible to travelers or tourists.

Today, only two buildings have survived from the boomtown, the town’s jail and the church. Now called the Okanagan Falls United Church, it was dismantled and relocated north to Okanagan Falls in 1929. This church was the inspiration for the popular winery ‘Blasted Church’, due to how it was dismantled. A stick of dynamite was hung in the centre of the building with all the doors and windows closed, and the force of the small explosion would loosen the nails, allowing the wood to be more easily removed without damage, and rebuilt in its new location. The church is still in use today!

The second surviving building is the town’s jailhouse, a curious lumber structure made by stacking machined boards on top of one another and nailing through them. The result is a sturdy building that keeps out the heat. The jail was moved from the ruins of Fairview to the Oliver & District Heritage Museum, where it acts as an extra exhibit space and is always popular with visiting school groups. When I worked there, we had to clean out all the bugs after it had been closed for 2 years and it will be forever burned into my mind (because of that & because of posing a dummy like a sleeping prisoner and telling children to be quiet so they didn’t wake him…)

So there you have it, a brief history of Fairview, a town born in the gold rush and saw prosperous years before its death. The burial ground, much like the townsite, is still present on the hills west of Oliver, though if you were to drive passed without knowing they were there, you might miss them. If you are interested in visiting the town site, it is free to the public. The burial ground is located on crown land, but you need to cross private property to visit it, and require permission to do so. 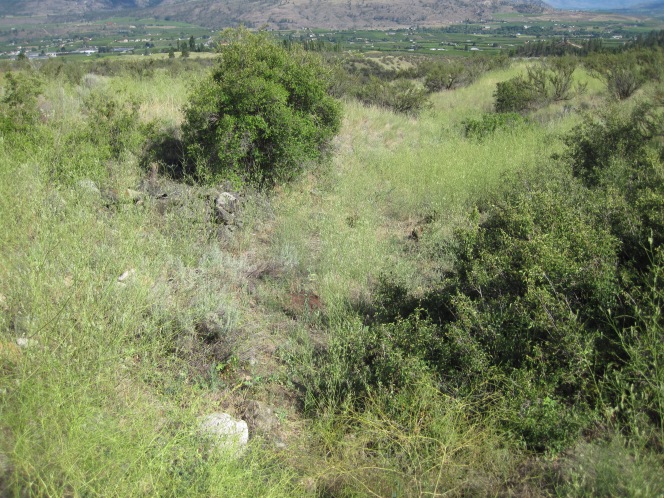 There isn’t much left at Fairview. A low ridge can be seen on the lefthand side of this photo, potentially indicating a former wall. (photo by author, 2013).

BC Archives. 1899. Hotel Fairview [image]. Item C-00875. The BC Archives no longer holder this image. Copy Prints and Negatives have been returned to the Osoyoos Museum. Available online at: https://search-bcarchives.royalbcmuseum.bc.ca/we-no-longer-hold-this-image-copy-prints-and-negatives-have-been-returned-to-osoyoos-museum-hotel-fairview