Archaeology isn’t quite like they show it in the movies or on Time Team. Of course, we all wish we could just walk into an area, feel the wind, and know exactly where a site is but unfortunately it doesn’t work like that (and we usually have more than 3 days if excavations are happening too)!

Last summer during my excavation at Ferryland, there were quite a few moments that started out feeling as if we’d found something very dramatic, which quickly dissolved into mild disappointment and sighs. But that’s archaeology right? If you’re doing a project that is looking for something, rather than trying to see what was happening in general, then there are going to be a lot of empty test pits. This one wasn’t empty though…

“We’re looking for graves!”
It always sounds very exciting to visitors and volunteers alike, and that is how I start off talks to tour groups at the site when they stop by to visit. But peoples’ eyes tend to glaze over a bit when I break the news that I’m not looking for burials with the intent of exhuming the remains. Rather, I’m looking for evidence of the grave shafts themselves (gravestones would be a bonus too), in the form of soil features, to build a better understanding the the spatial relationship between the burial ground and the settlement at Ferryland. I study burial landscapes, basically, and I’m looking for rectangles of sediment that are different than the surrounded sub-soil. Different in this case might mean colour, makeup, texture, inclusion %, or even just sound against the trowel. 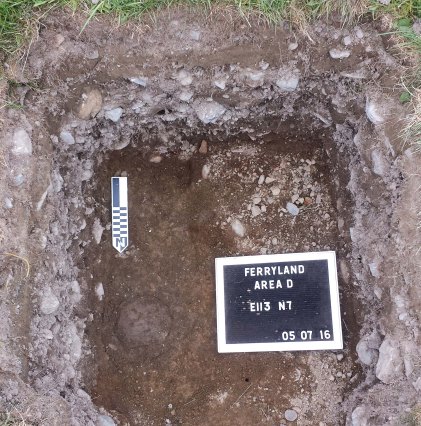 Outlined post hole / mould feature, pipe stem had been collected at time of photo. Photo by author, 2016, who did not straighten her walls.

During week 1 of the 2016 excavation, we opened two trenches. The first was 1m x 3m and contained the usual mess of 17th-century – 21st century objects all mixed up together. At the bottom there was a post hole and post mould, visible in the subsoil, with a piece of a pipe stem in between the two features which could date it to the late 17th century.

This was a great find within the first 2 days of the dig because it showed my volunteers what kind of soil changes we were really looking for, and definitely helped establish a goal. It’s really fun to work with people who are in the field for the first time too, and I felt like I got a lot better at explaining my research and why certain things are done as a result. 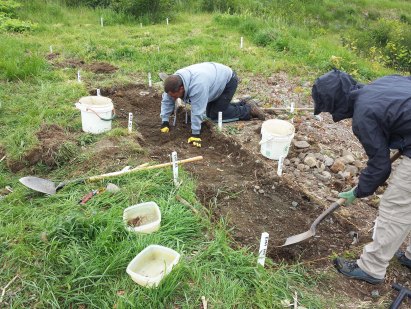 Even with shovels, it’s difficult to get through all those rocks! Photo by author, 2016.

We opened a second trench on day 3 of week 1 because my volunteer team were digging machines! This trench, dug through a vicious patch of Japanese Knotweed that I’d had to cut several times already before we got to the excavation stage, was 1m x 4m and had almost no topsoil. This whole area, between the modern kitchen garden and the eastern defensive ditch, had long been speculated as the location of the burial ground and is even drawn on an interpretive sign in that location, so it had to be the first place I looked, right?

It didn’t take us too long to get down to an interesting layer, and for one of my volunteers to point out that there was some very loose sediment along the eastern edge of his unit. Shortly after that, we had another strange soil feature in the southern unit too, in roughly the same shape. We kept digging, and the features continued into the subsoil, which was a very good sign! In most places at Ferryland the subsoil, which was deposited by glaciers so we know that is the “bottom” for material culture etc, is around 40-60cm (this varies wildly of course). Graves would have cut into the subsoil if they wanted to go any deeper, and thus if the top soil was plowed for a farm the grave shafts would no be visible anymore unless you dig down to subsoil, clear it all off, and look for a rectangle or oblong shape. The subsoil is very compact in most spots so spotting a disturbance, even 400 years old, goes well most of the time. 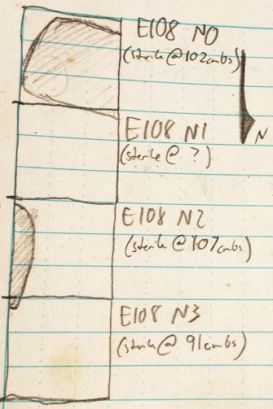 Page from my field notes, mapping the two features.

I’m sure now you can figure out why myself and my team were excited! Don’t those look like graves?? At ~95cm wide, running roughly E/W, these two features ticked a lot of the criteria that I would look for in a grave shaft soil feature. By all accounts, this was looking good! We continued troweling the the features, making sure they continued into the subsoil, and gave up digging most of unit E108 N1 (hence the Sterile @ ? in the notes) to use as a step once we realized we were going more than 3 feet below surface. Health & safety! As I troweled away on the southern feature, I began to notice that the east wall of the feature were sloping inwards, first just a bit and then more dramatically. At first I didn’t think much of it, the subsoil is tough to get through and the 17th-century grave diggers wouldn’t have been as on the ball about straightening out their walls so sure, sloped grave walls made sense, right? But I was suspicious and started working on just one end, digging down to either find evidence that this was a grave or to find the bottom of this mysterious soil rectangle.

“CRUNCH”
My trowel connected with something just out of sight in the loose sediment piled up at the bottom of the feature and my heart sank a little. That was not the sound of coffin wood, or the unfortunate connection with bone or nails. That, my friends, was the sound that decaying plastic makes when you stab through it with a heavy metal trowel. I sat for a second, then put my trowel down and pushed away the loose sediment with my hands (one gloved, one not, per usual) and identified the culprit:
A large, blue, antifreeze bottle, nestled in the feature below subsoil.

There used to be houses all along the Pool area at Ferryland, and where we were digging had, at one point, been near one of those houses. Because of the sloped eastern wall, but not northern and southern walls of the feature, I would estimate that it was caused by a back-hoe bucket, and was used to dispose of modern waste, like the antifreeze. We stopped digging in that trench, and needless to say, my volunteers were disappointed that my pause in the trench was not the result of finding proof of a grave. But it couldn’t have been that easy, right? It was only our first week at the site!

If there is a moral to this story, it would have to be to make sure you double/triple/etc-check your findings, because they might not be consistent if you dig a little deeper! And to keep a look out for anti-freeze bottles where you’d least expect them. 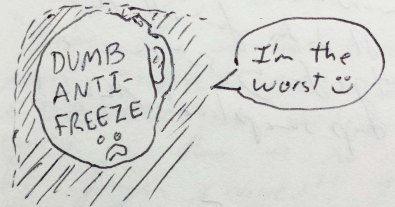 I didn’t end up taking a picture of the actual bottle, but apparently I drew it in my notes later on!