I recently had the opportunity to visit Ottawa & Gatineau to attend the 50th Canadian Archaeology Association Conference, hosted by the Canadian Museum of History. It was an amazing meeting, and gave me the chance not only do discuss my research with a ton of Canadian archaeologists from all across the country and hear some really ridiculous stories, but also to connect with people whom until then I had only known through a digital network (twitter).

There were several very interesting talks on indigenous and historic burials at the conference, including several on remote sensing of graves (that is for another day, however!). After the conference, I got the opportunity to go on a tour of the Diefenbunker! It’s one of those sites that you hear about in high school social studies, giggle at the name of, and then don’t think about again until it comes up in the list of events at your conference. I knew I had to be on the tour, but I didn’t know that part of the tour was going to be about death! Lucky me, right?

The entrance and blast tunnel of the bunker, meant to keep radiation and shockwaves from smashing down the doors.

The Central Emergency Government Headquarters, or the ‘Diefenbunker’ was constructed in the 1950s to protect Canada’s top political and military leaders in the event of a nuclear fallout during the Cold War. Canada was perilously situated between the USA and Russia and many citizens were concerned of what would happen to us if missiles started flying overhead. Prime Minister Diefenbaker ordered the construction of 50 bunkers across the country. Only 30 were built, and many of the others are not generally know about by the public (Manning 2003). The bunker, constructed in Carp ON, was a poorly kept secret, at nearly 100,000 sq/f and 4 stories deep! Everyone who lived nearby knew it was being built, but most people didn’t know what for. 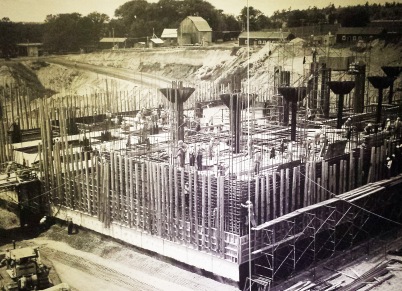 This is very subtle, don’t you think? Photo taken of image at the Diefenbunker Museum, 2017.

The idea was that in the event of a nuclear attack, with enough warning of course, individuals on a secret list would be whisked away to the safety of this underground bunker. At all times, the bunker held enough food and water for 30 days of containment for 565 people (Diefenbunker, Thermidor 2010).

Picture that for a moment, 565 people crammed into a building, not allowed to go outside for an entire month. What if you had been exposed to the radiation before you managed to get inside the bunker? What if you got sick from the exposure, and two weeks in a containment room weren’t enough to save you? What if you died in the bunker? The designers of the bunkers had thought of that! Your body wouldn’t harm others, that’s not how radiation sickness works, and a corpse isn’t hazardous to anyone’s health just sitting there. However, everyone was suck underground in the bunker for 30 days, so what would they have done with your body until the time was up?

Here our tour guide gestured to the Freeze / Morgue, as it was labeled on the sign.

The bunker used a method that is employed on a lot of large cruise ships nowadays: The freezer. More specifically, the freezer for the food at the Diefenbunker also doubled as a morgue in the event of a death, and it was something that everyone was aware of. It would have taken too much power to keep a spare freezer running 24/7 just in case, so bodies would have been wrapped in a body-bag, and tucked carefully into the food freezer until the event that it was safe to emerge, then you would have to just carry the deceased to the surface and bury them as you will.

Because a lot of these sites were active for years after their construction, a lot of the information surrounding their operations is still classified information, and I was unable to find much on what other Canadian bunkers planned to do with casualties while under lock-down, but I found this case fascinating. Nothing was mentioned on an intended post-fallout burial ground location, but it would have to be somewhere quite far away as to not be located directly on top of the underground bunker.

Before the tour, I hadn’t really considered what one might do with a dead body in a cement bunker, but it’s definitely something that you would want to work into your nuclear fallout plan. By freezing the body, you ensure that they are going to be given a proper burial when possible, and that probably brought comfort to the people who would have been locked in an underground vault of their own.

Simulated body-bag on a shelf in the food freezer / morgue at the Diefenbunker, 2017.

We managed to escape the Cold War without a nuclear explosion and a lock-down never occurred at the Diefenbunker, but it was very interesting to learn that they really had covered all of the necessities of life and death in the event of a disaster.

Thank you to the staff at the Diefenbunker for giving us a tour of the facility, and the Canadian Museum of History for organizing the event.