As my own adventure into archaeology..or death and the media, I thought it would be fun to blog along with Netflix’s new show ‘The Frankenstein Chronicles’. 50% of this desire is based on the subject matter and a few of the lines regarding ‘beating death’ in the trailer, and the other 50% are because it stars Sean Bean and his heavy northern accent. Lets go! There will be spoilers!

Episode one is called ‘World without God’, and opened on Sean Bean on a boat in the fog. Asked to take a man’s life, he is handed a short sword by another man and I had flashbacks to Game of Thrones for a moment. (Ned Stark, we miss you.) Before the opening credits roll, Ned encounters the dead body of a child on the beach, made of stitched together body parts, who grabbed his wrist and made me jump. I am not going to handle this show well.

‘How do you murder something that’s never been alive?’ the surgeon asked, already implying one of the themes of the original novel, in the form of a dead child. Mary Shelly lost her baby and wrote of it in her journal, the theme of lose becoming central to her famous story.

Oh look, the main character’s name is John Merlott, so I guess I’ll stop calling him Ned. In his new apartment he opens a box with lockets inside, each containing a memento mori of his wife and daughter, locks of their hair.

They are dealing with passing the Anatomy Act of 1832 in the show, which allowed doctors, medical teachers, and medical students to dissect donated bodies, rather than rely on the corpses of criminals (or ones stolen by Resurrectionists, as I spoke about in my previous post), and had great opposition at the time. The sewn-together body is suspected to have been created by people who oppose the Act, and John asks the surgeon if his subjects ever move, like a chicken with its head cut off, ‘the energy persisting after death’.

The grey overtones in the setting of this show so far are playing excellently to the mystery of the deaths. I’m also impressed to see some diversity in this portrayal of early C19th London, with several POC. Fingers crossed they keep that diversity going.

Apparently John has syphilis, an accurate angle for the time and an interesting way to show the main character grappling with his own mortality. 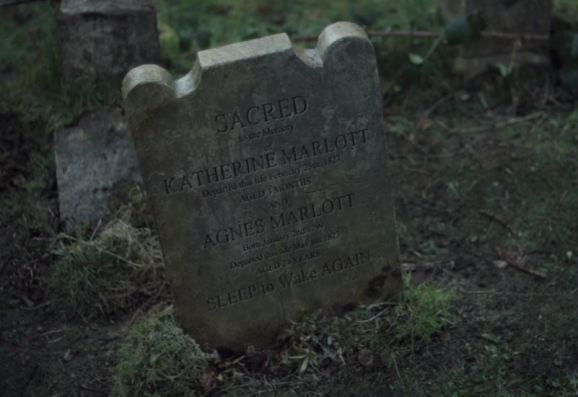 Sorry, but can we just talk about this gravestone for a moment? I’ll give it the shape, that’s accurate enough for the period, but the text is certainly off! Let me redesign your gravestones, Netflix, I’ll make them more accurate than that thing. Sorry John, but you have to have at least an italicized script on there, or an overly ornate or huge ‘Sacred’.

During hallucinations from his mercury medicine, John hears his own words ‘I know what it is to grieve.’ in his head, spoken earlier in the show to the father of one of the missing children, and we see a flashback to his wife, dead on a beach. The final shot is of the dead street urchin who was helping John look for missing children.

Loving this so far, and I’m excited to see where they take it when I watch the next episode!