If you are new to the study of burial markers and don’t come from a geologic background or have prior knowledge in basic geology, grasping the differences in materials found in burial grounds might seem like a monumental (hah) task! In this post, we will be discussing the composition and problems/perks of different stone types that are found across North American historical burial grounds, as well as common erosion issues that can be seen across these stones.

Firstly, this post will be dealing with gravestones in the most specific of the sense. There are, of course, many different types of markers for a grave. Some are made from wood (biodegradable), ‘white bronze’ monuments made from zinc, cast-iron, cement, and more! Each one of these materials comes with its own pros and cons, but we won’t be discussing them in this post. As a sometimes geoarchaeologist, I’m here to talk about rocks.

The impression that people get from a stone monument goes hand in hand with the ideal of the ‘immortal resting place’ that surround the grave, particularly in North America. I discussed the idea, in a previous post, about understanding and allowing the decay of structures of objects as part of their natural life cycle, and this goes for gravestones too. While I wholeheartedly support monument conservation on gravestones where it makes sense to do so (i.e. the stone is in ok condition but has cracked in half and can be repaired vs. a degraded stone that is in poor condition and additional damage could be done by trying to ‘restore’ it), there is a somewhat of a line that means some things will be left to decay. And you know what? That’s fine. Nothing on this earth is permanent, and in a burial ground or cemetery is certainly the place to remember that.

There are three types of erosion that effect gravestones: Chemical, Physical, and Biological (English Heritage 2011). Chemical erosion includes ‘disruption through soluble salts’, in which the stones draw up ground water and salt can be drawn into and crystallize within the stones (English Heritage 2011). It also includes the effects of acid rain and pollution. Physical erosion is the natural degradation of the rock through wind, rain, etc, as well as through freeze/thaw cycles. Biological erosion details the effects of trees, shrubs, lichens, and vines of the rock, which can lead to damage to the surface and body of the gravestones.

Basically stones, like all things, wear away. But they can also last a heck of a lot longer than the bodies buried beneath them! Without further ado, lets discuss the geology, pros, and cons of common stone types you’ll encounter in historic burial grounds in North America.

Sandstone: This material is a sedimentary rock which is comprised of sand grains (0.06 – 2mm) which have been compressed together to form a solid rock. The make up of sandstone varies based on the materials inside, with some examples having a very high quartz content, with others having lots of feldspar or other materials. High quartz content is an indication of a mature sand. Sandstone is fairly porous. They are clastic in origin, rather than organic (think chalk) or chemical (jasper), and the materials which hold the grains together is typically a calcite, clays, and/or silica. While the grains themselves might be quite hard, the material between them is softer and prone to faster erosion.

Gravestones made from sandstone are easier to carve than a harder material, but this also means they often exhibit poor weathering resilience, resulting in lamination or exfoliation causing large portions of the stone to fall off, blistering of the stone surface, discolouration due to soot or a reaction between sulphur dioxide and calcium carbonate, and the effects of lichen growth and vines using the calcium carbonate in the sandstone as a food source (UCL 2019).

1716 gravestone at Trinity, NL. This material was imported from the UK or Ireland. (photo by author 2017).

Limestone: Another sedimentary rock, limestone is made up of at minimum 80% calcium carbonate (CaCO3), which is ‘prone to dissolution by acid rain, a week carbonic acid’ (UCL 2019). The high CaCO3 content in limestone is due to the skeletal fragments of marine organisms which make up the material, such as corals and shells. Some forms of limestone have visible fossils in them, but the majority of the fossils are tiny fragments of organisms, as well as containing silica, and often sand, silt, and clay. It does not contain grains.

Limestone is particularly susceptible to chemical erosion due to the relatively soft nature of the rock. Gases in the atmosphere such as sulphur dioxide, which often result in a loosening of the exterior of the stone causing loss of material (‘sugaring’) and the formation of a black crust in locations with higher rates of pollutants. Due to the high CaCO3 content in the rock, limestone is also a favourite of vines and lichens, which anchor into the surface by eating into the calcium, both physically altering the surface of the stone and trapping water inside. (by no means should you pull vines off a gravestone, as it will pull portions of the stone off with it. Let an expert deal with vegetation safely!) 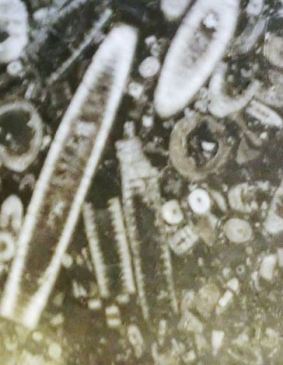 Historically, limestone has often been referred to as marble in many instances. Stone masons have long called limestones ‘marble’ as a catch all term, but that does not mean they are the same. This is likely due to the similarity in appearance between the materials in many examples, and the fact that marble is created when limestone undergoes metamorphism, a process in which an igneous or sedimentary rock undergoes intense heat and/or pressure, changing the chemical composition of the material itself. It creates a new rock, one that is completely different from the rock that helped to form it. As a result of the metamorphism, any existing visible fossils are destroyed and are no longer visible. This is often the clear distinction between limestone or marble: if you can see fossils, you are looking at a limestone. An excellent example of this can be found in Durham Cathedral, UK, where the famous black columns within the cathedral are made from ‘Frosterley Marble’. While this is its common name, it is not the stone type which is a black limestone with stark white and cream clear fossils inside. The columns themselves are a sight to behold, and date to 1350 BCE!

This marble gravestone at the Brick Street Cemetery, London, ON from 1867 has been repaired in several places, and shows evidence of black staining (photo by author 2018).

Marble: Marble dominated the North American grave scene through the 19th century, with their clear white faces gleaming throughout cemeteries and burial grounds. The stones are fairly soft and easy to carve, and were exported across the continent as a very popular option, including up to Newfoundland in the early-mid 1800s! As already mentioned, marble is a metemorphic rock comprised of carbonate minerals, created after limestone undergoes metamorphism (or dolomite, or other sedimentary carbonate rich rocks, but mostly limestones).

Pure-white marble gleams when polished, but after only a decade or so exposed to various weathering forms, the white surface becomes pitted and stained, and inscriptions begin to erode. If you touch a weathered marble, fine grains will brush off the surface (UCL 2019). Marble is particularly susceptible to acid rain and other chemical weathering due to its high CaCO3 content. They are also badly damaged if set into or repaired by cement. Cement traps water inside the material, rather than letting it escape through the porous stone, and results in weakened points in the stone with higher moisture content. This means they will weather faster, and break easier. Don’t touch your gravestones with cement, friends!

Slate: Slate is one of my personal favourite material types for gravestones. An extremely fine-grained, foliated metamorphic rock, slate is the result of shale (sedimentary) undergoing metamorphism. A popular building material, slate architecture can be seen across Wales, and in North America mostly in the form of slate roof tiles. The 17th century settlement of Ferryland, Newfoundland, utilized local slate and shale to construct their settlement!

As a gravestone, slate is extremely durable and great for displaying incised details for long periods of time. It is, however, still susceptible to lamination which causes the layers of rock to come apart. Often when this occurs, the text on the broken pieces shows very little weathering otherwise. This material is less common in North America as it is in the UK, but you can still find excellent, well preserved examples.

Granite: This rock gained popularity for gravestones around the end of the 19th century, and is the most common stone in contemporary cemeteries today. The only commonly igneous rock in the historic gravestone materials roster, granite is made up of quartz, feldspar, and other interlocking materials such a biotite. It is a very hard and tough stone and has been used as a building material throughout human history due to its durability and poor permeability. They have a high silica content, typically.

Granite is labour-intensive to carve using hand tools, and the majority of gravestones we see today made from granite feature laser-cut inscription. In terms of weathering, polished granite surfaces have been seen to last for over 100 years without substantial give to weathering (English Heritage 2011). However, they can begin to break down due to the deterioration of the silica within the rock (English Heritage 2011).

Conclusions:
There we have it, the most common stone types that you’ll see within historic burial grounds in North America. Of course, this is not a catch-all list, and there are many types of rock that are used regionally, or variations in rocks and/ore environments that will change the way and rate that they undergo weathering. What is important to remember when recording gravestones is that while rock seems permanent, it isn’t, and you should always be careful when touching a gravestone not to lean against it, push it, or sit below a leaning headstone or table tomb, as you don’t know what state the material is in (and no rubbings or dumping stuff on them either. Stop it).

I’m extremely interested in the way in which gravestones are subjected to weathering, and the effect of weathering on different types of inscriptions (paper in the works!). This is especially true for limestone, hence the lengthy discussion of limestone above. It’s my favourite in gravestones and lime kilns!

If you have any questions or comments for me about common materials used to create gravestones, please drop me a comment below or send me an email! As always, thanks for reading.

If you enjoyed this, and my other work, please consider buying an early-career researcher a coffee? Link is in the right sidebar above! Thank you!

9 thoughts on “The Geologic Composition & Weathering of Gravestones.”